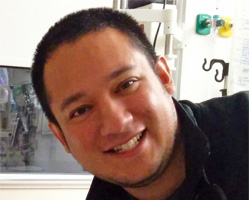 Ren is the ‘real deal’ international man of intrigue. Born in Peru and raised in Paraguay, he moved to the U.S. at the age of 20. He attended Kansas City University of Medicine and Biosciences for medical school. He loves traveling around the world, salsa and merengue dancing, South American food, romantic comedies, and his beautiful wife Katie Turner. The majority of Ren’s patients are Spanish speaking, which he enjoys for multiple reasons, one of them being the food they bring to the appointments. His plans after residency include practicing in underserved populations (rural and inner city) and spending part of the year on international medical missions.