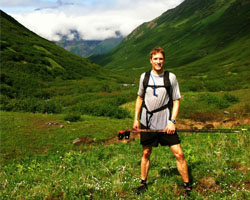 Peter grew up in St. Paul, Minnesota, in a family who spent all of their free time outside hiking, canoeing, or skiing. After graduating from Carleton College he moved to Europe for a year as a cross country ski racer. He then headed to Boulder, Colorado – the Mecca for atmospheric research (and conveniently, endurance sports) to pursue a graduate degree in Atmospheric Chemistry at the University of Colorado. After two years at CU, he realized that the life of a researcher was not for him and that his contribution to the world would not come by means of reversing Climate Change….or endless computer models. After several years spent immersed in the world of professional Nordic Skiing, both as a racer and as part of a duo who kickstarted a ski shop, a trial of health issues brought him to the world of medicine. He became very interested in Functional Medicine and Osteopathic Manipulation, which led him to Pacific Northwest University for medical school. The Alaska Family Medicine Residency was Peter’s clear choice as he could pursue medical training in the setting of boundless outdoor adventure. His medical focus is on lifestyle medicine and seeking out intervention as far upstream as possible; and he has a reputation for taking his patients on grocery shopping trips.