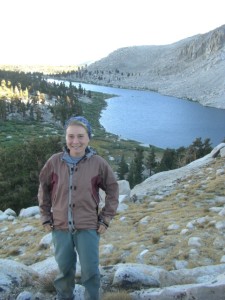 The oldest of 6 children and former biathlon athlete, Nellie’s playgrounds were the lakes and rivers of Eastern Canada: Quebec. During her teenage years, she spent her summers navigating the waterways by canoe and her winters exploring the frozen surfaces on skis. She nurtured her love for the outdoors throughout college and medical school, spending her free time in the mountains of the western US. She studied nursing in Tennessee and decided to practice her new-found skills in Chad, Africa, where she met a family-practice trained doctor who could do “everything.” This inspired her to continue her studies and attend medical school at Loma Linda University in Southern California. Although she was often mistaken to be the daughter of a medical student rather than a medical student herself, she graduated nonetheless and continued on to residency at AKFMR. She chose this residency for its capacity to train her to be the rural doctor she aspired to be, allowing her to follow the footsteps of her mentor in Chad in caring for the underserved. Although residency life does not afford much downtime, you might spot her in the outdoors in her free time, and even confuse her with a wild animal if you pass near her on a trail. That sound of branches cracking may not be a bear, but rather Nellie, picking wild edibles while they last, dreaming of the feast she will create once back in her kitchen.