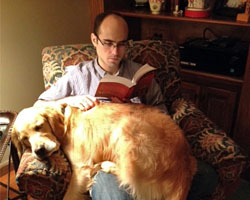 Derek is a newcomer to Alaska, coming from the hills of southern Illinois, which he had settled into happily after an unsuccessful trial of urban living during his undergraduate years in Chicago. His interest in Byzantine history kept him going at the University of Chicago, with a particular focus on the impact of a 14th century monastic movement on the hospitals in the Empire. Derek’s interest in medicine and things Byzantine coalesced somehow, and he spent a year in the Near East, first volunteering at the national medical center in the Republic of Georgia and teaching English in the capital city of Tbilisi, then eventually escaping to a remote monastery high in the Caucasus Mountains where he spent his days exploring medieval villages, snow-capped mountains, and ancient glaciers.  He then returned home to southern Illinois for medical school. When the time came to choose a residency, he decided training in Alaska would provide him with the best foundation for practicing independently in the timeless, small, remote places he has always felt most at home. Derek has loved living in Alaska and looks forward to remaining here until he feels some compelling need to be elsewhere, or until he winds up lost, frozen, or mauled by the local wildlife.