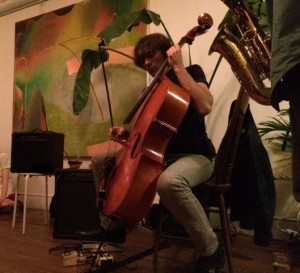 David Barth Penn arrives in Alaska, having followed his passion for creative expression and shared human experience all the way from a career in photography and music to its next logical step: training to be a family physician.  Originally from Milwaukee, David began his trajectory the son of two physicians.  Having thus long ago decided not to pursue medicine himself, he and friends instead started a punk band. Despite being in high school, the band actively participated in the independent music community.  The experience of performing, organizing shows, releasing albums, and touring, led him to move to Minneapolis for college, where he went on to earn a BFA from the University of Minnesota: Twin Cities.  From there he spent some time in Copenhagen, studied at Skolen for Fotografi, and ultimately one day walked off a homebound plane, having decided days before to eschew his connecting flight and instead spontaneously move to NYC.  In New York, David continued his active involvement in music and at the same time worked as a photographer for an auction house. It was during this time that David connected the dots and saw that of course he’d been on his way to studying medicine all along! But to do so required some coursework. Completing a postbacc in premedical studies at Columbia University, he next moved to Providence, Rhode Island. It was there, while earning his MD at the Warren Alpert Medical School of Brown University, that he had the realization that it was the art of Family Medicine that would propel him further still. David is absolutely thrilled to be here at AKFMR, living with mountains, surrounded by inspiring folk, and training in an expansive environment that intensely embodies both the breadth and depth of family medicine.