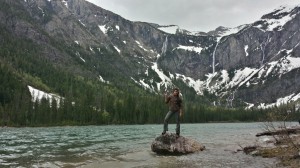 Ali grew up in several small towns in southeast Wisconsin. Her favorite childhood memories always involved time spent on her grandparents’ farm. The farm was fully equipped with an endless supply of hay bales which sparked her vivid imagination and led her to wonder if the world is not an endless supply of flat farmland. Luckily, her questions were answered on her first trip out west when she was 16 years old. She realized that mountains were not simply illusions from fairytales but real things that you can play on! Since that moment, she has been on a personal quest to live within the majestic mountains while simultaneously developing a skill-set to help people in need. Fortunately, she found that this is a real possibility with AKFMR! She is so excited and thankful to be in Alaska, where she hopes to immerse herself in her new community and get a dog.